The 12 Best Cities for Whiskey Lovers 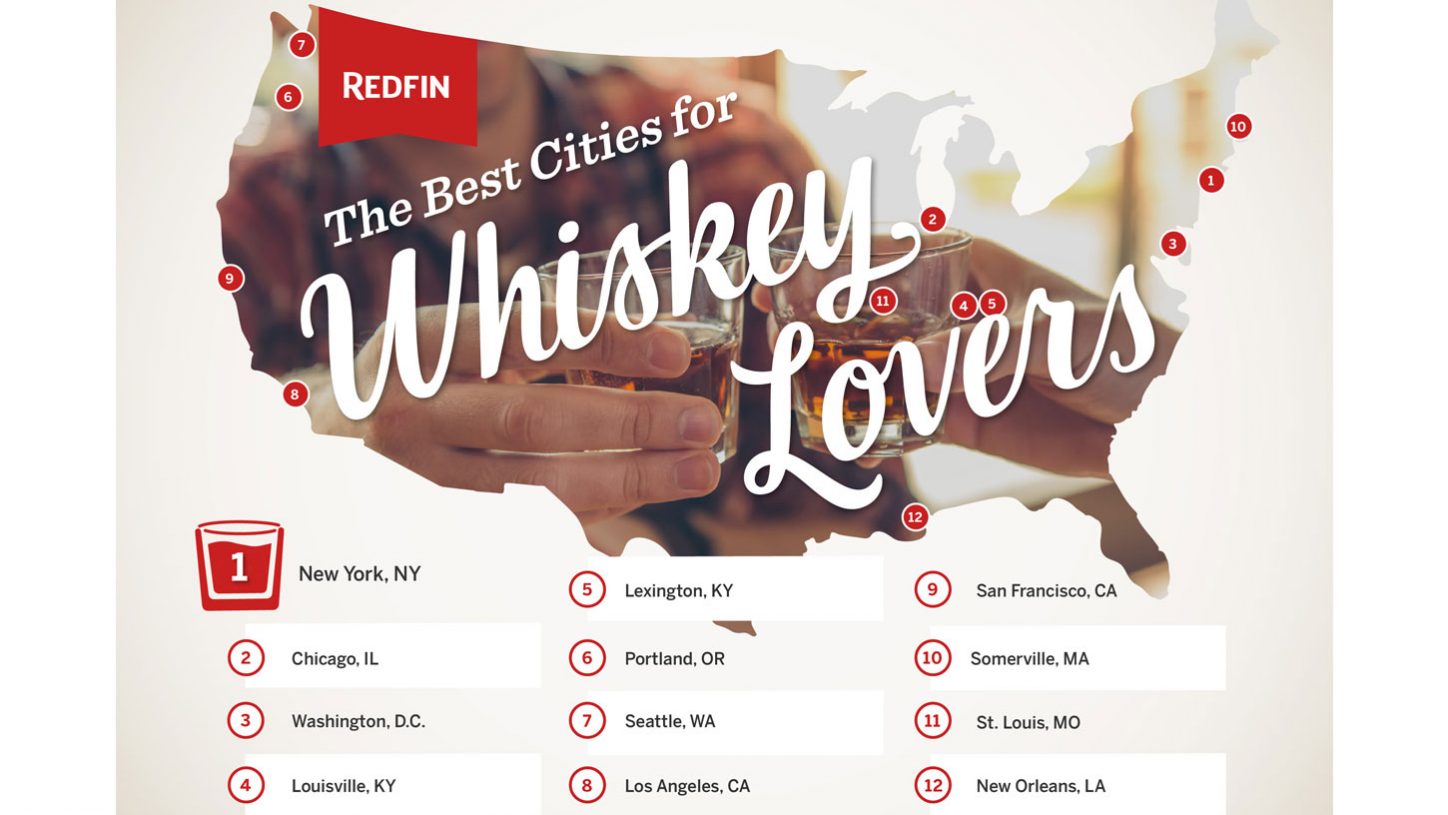 For whiskey dilettantes, there are few luxuries as gratifying as sipping a smooth, flavorful pour of their favorite barrel-born libation in a scenic setting. Whether you prefer your firewater neat, on the rocks or as part of a crafted concoction, we’ve rounded up the most beloved joints for enjoying a glass (or two) of whiskey from coast to coast.

For the sake of consistency in this list, we’ve gone with the Irish and American spelling of whiskey. However, if you really want to prove your authority when you hit any of the below bars, lounges or honky-tonks, impress your comrades by distinguishing that Scottish and Japanese varieties are spelled whisky. No matter how you spell or savor it, you’ll love expanding your whiskey-tasting horizons at the hangouts below — just be sure to line up a ride home if your city’s Walk Score is low!

The City that Never Sleeps has no shortage of activities for locals and tourists alike, and if you fancy yourself a whiskey aficionado, you have no shortage of options to explore your passion. The best part? No matter where you are in the city, you’re just a walk or a subway ride away from your new favorite Scotch (even if you haven’t tried it yet!) or your go-to bourbon. And because NYC is so saturated with acclaimed whiskey hotspots, you can take your time exploring the city’s finest, or treat out-of-towners to an epic day of whiskey tastings from Brooklyn to Manhattan. Notable distilleries include Widow Jane and Kings County Distillery.

Chicago has a rich history rooted in the days of Prohibition, and many born-and-bred locals argue that the era shaped Chi-Town as we know and love it today. Fortunately, the days of banned beverages are long gone, and whiskey aficionados should add this city to their brown spirit bucket list. The city is sprinkled with spots that range from divey to dignified, and even offers the option of renting a trolley to take you from one hangout to the next.

Our nation’s capital has a booming bar scene that accommodates college students, locals, politicians and sightseers alike, so it’s no wonder it is also home to the most talked-about whiskey bar on our list, the Jack Rose Dining Saloon. If you want to see the wizard behind the whiskey, rum, gin or vodka curtain, check out one of the metro’s distilleries, some of which are only blocks away from where Prohibition was enacted more than a century ago. Based on our research and methodology, one thing is clear: if you make one special trip to satisfy your whiskey wanderlust, make it to DC. Check out One Eight Distilling for some truly DC whiskey.

Not only is Louisville about an hour outside of the Maker’s Mark distillery — where fans can get a behind-the-scenes peek into how their favorite booze is made, and even dip a bottle in the brand’s trademark red wax — but it’s also home to many celebrated whiskey venues. For a real taste of the nectar’s impact on the centuries-old city, take a stroll down Whiskey Row to get extra pumped for your voyage into barrel-sipping bliss.

Kentucky is world-renowned for its amber spirits, and was the birthplace of “Western Whiskey” — a departure from the rye whiskeys beloved by the East Coast — in 1792. It’s no wonder that the tradition lives on today throughout the city, which is home to seven notable whiskey bars. Whether you want to feel as though you’re traveling back in time to the speakeasies of yore or crave a more modern feel, Lexington is a true haven for any whiskey connoisseur. Just outside of town you’ll find household distilleries like Woodford Reserve and Wild Turkey.

Louisville isn’t the only derby-famous city that made our list, although whiskey nerds will probably be more emphatic about the style of race that Portland offers at its famous Pope House Bourbon Lounge. After exploring the city’s lush countryside, whiskey lovers ought to drop by one of the Rose City’s many acclaimed bars specializing in selections of 100-plus whiskies, and top off the evening by working toward a coveted Pope House horseshoe for completing the derby — an honor which is reserved for those who sample 50 whiskeys.

Coffee isn’t the only indulgent beverage to enjoy when the rain starts to fall over Seattle. After making your obligatory, must-see rounds at the Space Needle and Pike Place Market, settle in for a happy hour at one of the Emerald City’s cozy, sophisticated whiskey joints, which offer rare pours from across the globe as well as handcrafted cocktails created by fellow devotees. Seattleite’s are fans of locally distilled Copperworks, Westland and Fremont Mischief.

There is a reason the City of Angels is often portrayed in period films as a liquor paradise, even when it was outlawed. While LA may no longer receive its spirits supply from covert transport via underground tunnels, the whiskey scene is alive and well. No matter if you’re looking for vintage or contemporary decor, classic or craft cocktails, or are wandering the streets of Hollywood or Downtown LA — Los Angeles has something for every whiskey buff.

Anyone who seeks out the finest barrel-aged juices will argue it’s an artform to achieve a perfect balance of flavor and smoothness, and the arts-centric community of San Francisco agrees. The most notable whiskey bars we discovered blend an eclectic mix of industrial, vintage and neighborhood hotspot vibes — a perfect way to not only enjoy a new or established whiskey favorite, but also the diverse spirit of San Fran.

Bostonians need not venture too far to uncover Saloon, one of the East Coast’s most beloved hidden gems harboring the best whiskeys known to man. Their approach to whiskey is as classic as Massachusetts itself, and celebrates the no-nonsense, no-frills history of grabbing a stiff drink at the end of the day from the bygone era of the speakeasy.

A certain pair of golden arches may signal that grab-’n’-go burgers are nearby, but the famous Gateway Arch in St. Louis beacons that amazing sips of whiskey are on the horizon. If you’re in the mood to splurge, take in a Cardinals baseball game at Busch Stadium in the summertime or a Blues hockey game at the Scottrade Center in the winter — both of which serve a variety of whiskeys — and then treat yourself to one of the city’s stylish whiskey retreats. Notable distilleries include Square One and Still 630.

The Big Easy earned its nickname due to its laidback way of life, and what better way to celebrate the breezy nature of the city than by enjoying a distilled delight? While N’Awlins is home to a handful of distilleries, the best way to enjoy a varied selection of whiskeys from around the world is to make a stop to one of its charming, homegrown institutions, where you can bask in the wonder of whiskey long after Mardi Gras.

Using a collection of curated rankings lists from across the internet and a variety of publishers, we considered a few key factors in developing our weighted points system:

For example, Washington, DC, is ranked number 3 on our list; although it has only two whiskey bars that came from our curated lists, both appeared multiple times in the top 3 rankings. This is why DC ranks higher than San Francisco, which has seven notable whiskey bars; while it has more bars overall, they are not ranked as highly by whiskey connoisseurs. Simply put, quality over quantity helped boost a city’s overall ranking!

Did we miss a whiskey bar that’s locally famous in your city? Tell us about it in the comments!

The 14 Deepest Whiskey Lists in America

The 10 Best Bourbon Bars in America

8 of the Best Whiskey Bars in America

The 22 Best Whiskey Bars in America

The 10 Best Whiskey Bars in America