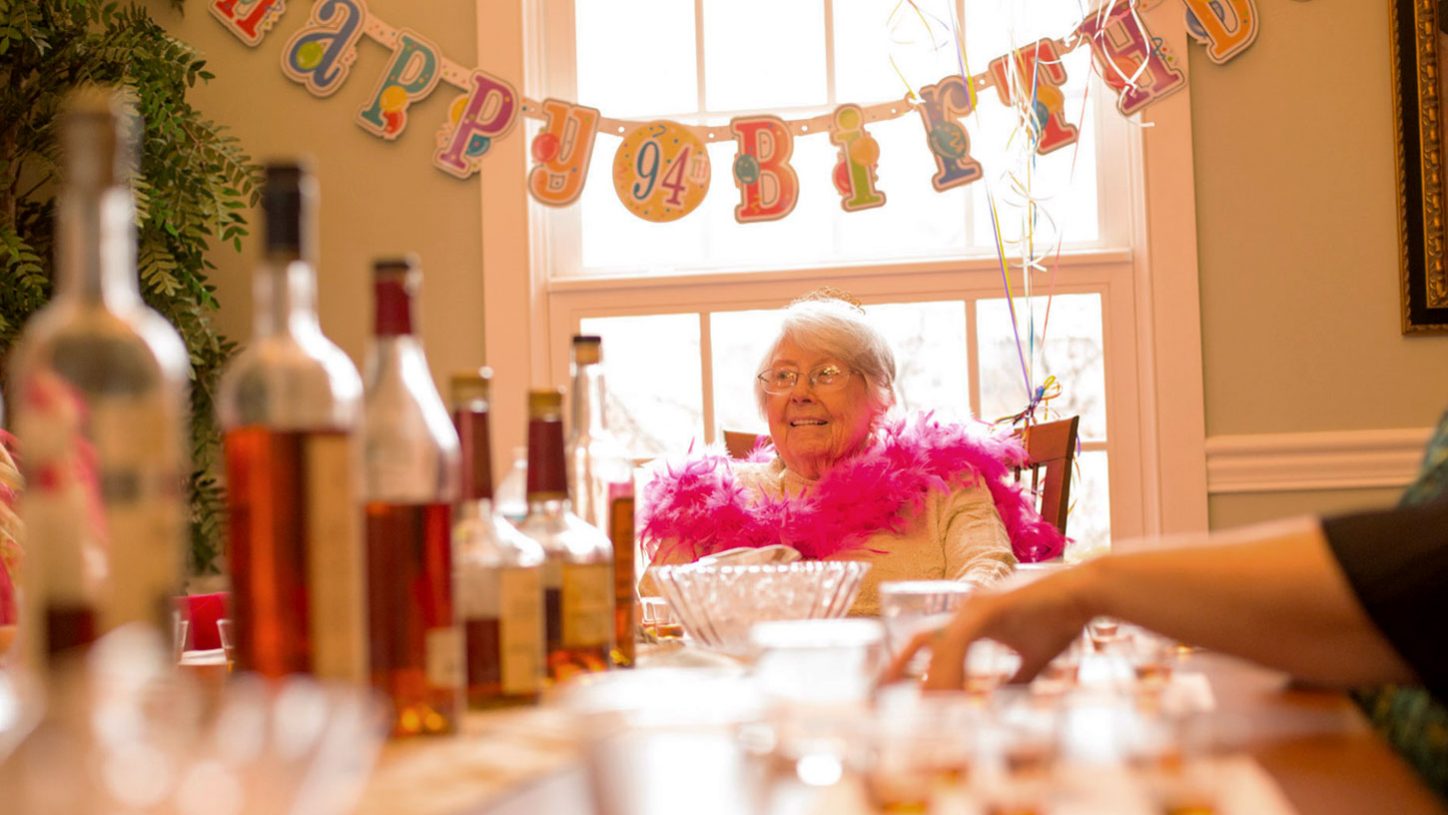 I still remember the first time I met Helen. It was at an event at a local pub. The management team at Saints Sky Bar in St. Matthews had gone out of their way to make us feel welcome. Once you made it up the steep flight of stairs, guests were greeted with a delicious cocktail and a fine array of appetizers. After the first few guests began to arrive, up the stairs came Candace with her mother Helen. Helen was a bit winded after making the trek, and I soon began to apologize for not thinking ahead about guests using the elevator. Helen just laughed, claiming she needed the exercise and then quickly asked, “Where’s the bourbon?” I escorted Helen to a seat and went directly to the bar to get her a cocktail. A newfound friendship and bond was formed.

Since that night, Helen has come to many different Whisky Chicks events. If we know she is coming, we make sure she has a place to sit, a cocktail waiting for her and a steady supply of whatever it is we are serving that night. We have learned overtime that she has a ferocious sweet tooth and a long history with bourbon.

As I have gotten to know Helen, I have come to treasure those special one-on-one moments when I get a glimpse into who she is and how she came to Kentucky and began her love affair with bourbon. Helen has shared stories about growing up out west in the mining towns of Arizona and New Mexico. She lived in a small town along the famed highway Route 66, only 60 miles away from where the world’s first atomic bomb was detonated at White Sands Missile Range. She still recalls waking up at 5 AM to the sound of the explosion, assuming it was a powder magazine that blew up in one of the nearby mines. It wasn’t until later that they learned what it was. That is where she would meet her future husband Barney and together have 5 children.

Barney’s job, which was in mining, eventually brought them to Cincinnati in 1961. That is where Helen’s bourbon journey began. As she recalls, she really did not like bourbon. It was something she had to get used to. Apparently, her and her husband hung out with a pretty “boozy” group that liked their bourbon. Over time, a bourbon and water became her go-to cocktail and Mint Juleps were a mainstay at parties. Helen and her family eventually moved to Kentucky, first to Morehead and then to Louisville in 1974. By that time, she was done with moving and decided this was the place to settle. That was 43 years ago, and today Helen proudly calls Kentucky her home.

So what do you do when you realize one of your oldest members is turning one year older? You throw a party, of course. But not just any party, but a party that features 94 years of bourbon.

The party itself was a big surprise to Helen. She was joined by her daughter Candace, Candace’s friend Lori, and her daughter Karen and her husband Phil who drove in from Ohio to help celebrate. Helen describes the evening as, “Such a special event. I was caught completely off guard. My favorite part was tasting the different bourbons that were carefully planned to add up to 94 years and realizing how much effort had gone into the event.”

Helen, it was our pleasure! Watching you light up and enjoy every drop of bourbon was amazing. I will always covet the wisdom you shared when asked what you have learned over your 94 years. She said, “Have a goal. It can keep you from getting bored. And always have something to look forward to, like hanging with the gals.”

Well my goal is to be like Helen when I grow up. At 94, still hanging out with girlfriends enjoying fine, Kentucky Bourbon! 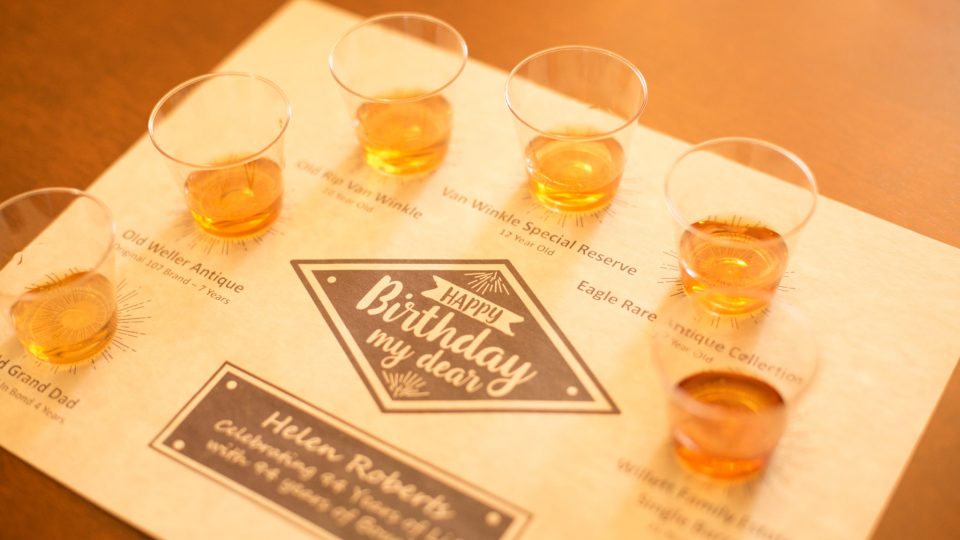 It was my husband Fred’s idea. Fred spent time carefully putting together the perfect lineup that included unopened rare bottles from his collection, even the highly coveted Pappy Van Winkle. I love his attitude when it comes to sharing. Fred believes the best way to enjoy bourbon is with friends. He likes being able to share and introduce something new to novices and connoisseurs alike. For Helen’s birthday he pulled out all the stops. 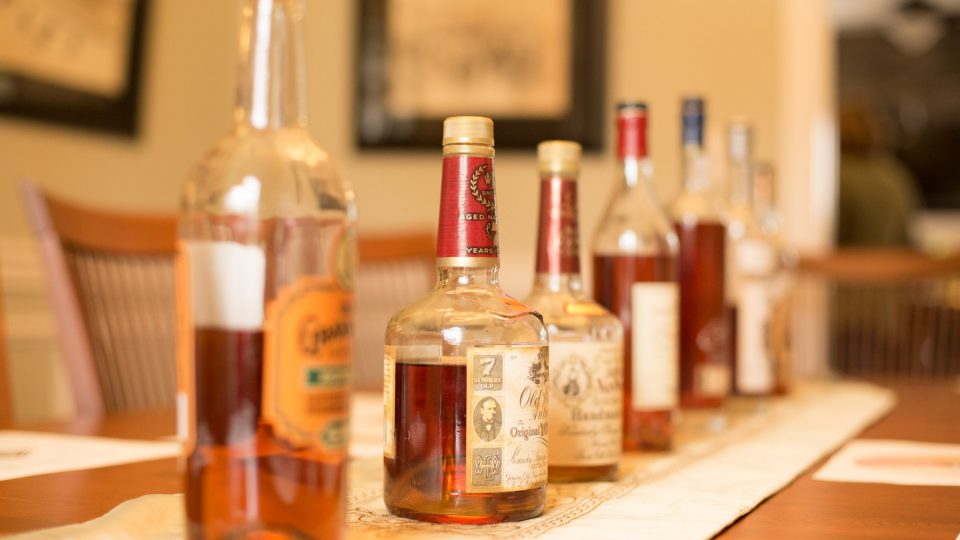