Kick off your summer with a Lucky Happy Hour at Kentucky Peerless! This family owned Distillery is making rye whiskey and bourbon from grain-to-bottle right in Downtown Louisville. Originally located in Henderson, KY, Peerless was one of the few Distilleries to have a medicinal license during the Prohibition. After 98 years, Corky and Carson Taylor (4th & 5th generation respectively) have renovated a 120 year-old building to revive the family namesake. The Distillery opened its doors in June 2015 and is patiently aging its products in their on-site rickhouse. 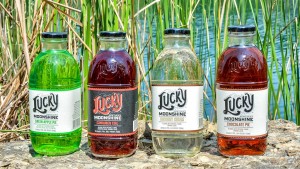 While the bourbon matures, they took a creative spin on new-make and created 7 flavors of Lucky Kentucky Moonshine. Enjoy various Lucky Cocktails while Corky & Carson take you on a behind-the-scenes tour of the Distillery and Head Distiller, Caleb Kilburn shares his process for making Peerless bourbon.

For $20 you can enjoy a fabulous girl’s night out! Peerless is filled with charm and character creating the perfect atmosphere to sample delicious cocktails and share tasty treats. Tour admission is included.

Attendees must be 21. No exceptions. Drink Responsibly