Horsing Around with Derby Traditions 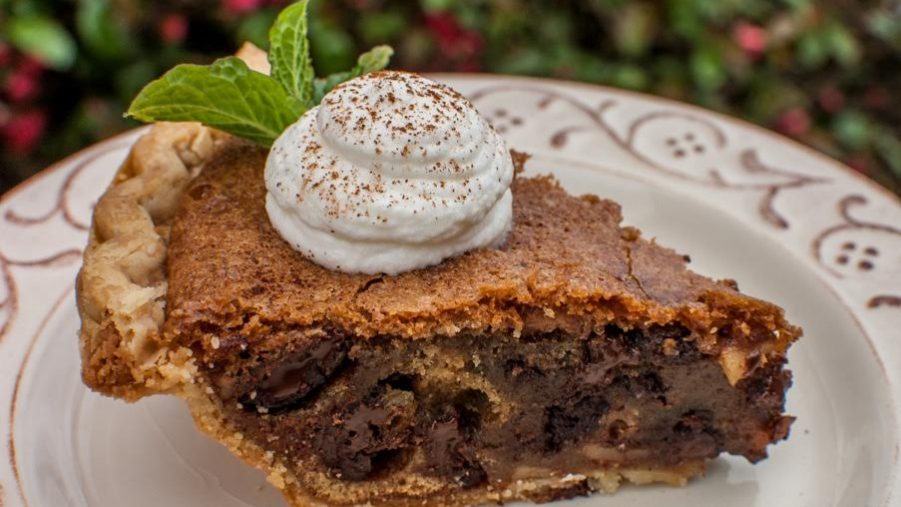 I spent two years in Kentucky attending graduate school at Murray State University (go Racers!), and even though I never made it to the Kentucky Derby, two of the most enduring memories of my time there involve that famous race.

I lived in the upstairs of a huge, old barn of a house two blocks from campus. When the weather cooperated, I’d leave the bedroom window open and fall asleep to the sounds of delicate breezes stirring in the massive oak trees. In the wee small hours of a Sunday morning in late April, I was startled awake by a melody wafting through the stillness—an anonymous musician playing the Call to the Post. This was not some drunken frat boy goofing around with a horn. The tune was played flawlessly, with finesse, and only once. Then silence resumed. I lay there chuckling at its absurdity before drifting back to sleep.

It’s curious how something like this can live on in your memory. I still laugh when I recall that impromptu wee-hours concert, far from the racetrack and far from post time. My other Derby memory was discovering the dessert that has commemorated the occasion for the last half-century or so. You know the one: It’s sort of like a chess pie and a nutty, chocolaty candy bar went sky diving together and their parachute didn’t open. Delicious mayhem!

In the ensuing years I’ve tried making this pie by various recipes, but I realized a couple of things that spurred me into creating my own:

First, most versions of the pie are too cloying. I remedied this by reducing the amount of sugar and substituting bittersweet for semisweet chocolate chips. And instead of pecans I use walnuts, which have an astringency and slight bitterness that help tame some of the sweetness. (In fact, some recipe writers have already figured this out and call for walnuts in their versions too.)

Second, the pie needs more depth of flavor. It has nuts, chocolate, and loads of sweetness, but that’s just not enough. I solved this issue by bringing in some friends from the spice rack. Those called the “sweet spices,” including cinnamon and cardamom, are great invitees to the Derby party. And for extra zing I include crystallized ginger.

If the mere thought of the traditional Derby confection makes your blood sugar spike and your teeth ache, consider this version. Or at least use it as encouragement to come up with your own…what should you call it?

There are copyright issues involving the pie’s most commonly known name. Lest the flying monkeys of the legal profession descend upon us I decided to toy with a few alternatives. The first to come to mind were “Perby Die” and “Erby-Day I-Pay.” Too silly? Then how about “First Saturday in May in Kentucky Pie?” Or the straightforward “Let’s Not Involve the Lawyers Pie?” For Game of Thrones fans there’s “A Pie Has No Name,” while in the Harry Potter universe the dessert name that shouldn’t be uttered is “Voldetorte.” I think I’ll call my version….. 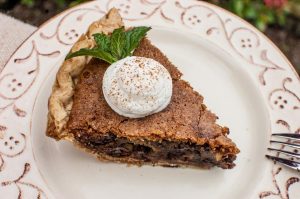 ½ cup all purpose flour, plus another ½ tsp. for coating the ginger

Preheat oven to 350°F, place rack in center of oven, and place a baking sheet on rack during preheating.

Toss crystallized ginger pieces with ½ teaspoon of flour to coat and keep them from sticking to each other. Then toss ginger with chocolate and walnuts and spread evenly in unbaked pie crust.

Whisk together eggs and sugars. In a separate bowl, whisk together flour and spices. Then stir dry ingredients into wet. Add melted butter and vanilla extract to the mixture, and stir to incorporate all ingredients thoroughly.

Pour mixture into pie shell, place on baking sheet in oven and bake for about 55 minutes, until filling is set. Remove pie to a wire rack and cool completely, about 1½ hours.

Carol is an award-winning food writer and chef based in Seattle. Her work has appeared in Best Food Writing 2013 and 2016 editions, Gastronomica, Leite’s Culinaria, The New York Times, The Los Angeles Times and several Edible publications.